MY STORY Out of the shadows

From street art to being collected by celebrities such as Antonio Banderas and Ronan Keating, Lhouette has had a meteoric career as a pop artist whose work sells for thousands. Earlier this year he made the news with a solo exhibition at a five star Mayfair hotel. Now he has a new collection, Beyond

Your real name is Ciaran Robinson. Why change it and where did your new name come from?

When I left the Royal Navy 10 years ago, aged 22, some of the first works of art that I started creating were outlines of the female form in differing poses. I was quite prolific with these, but at the time I was still quite unsure of whether I wanted to put my name to anything - or whether the work was any good - so I tagged it with a pseudonym Lhouette taken from “Silhouette”. A lot of collectors think maybe I'm French.

Have you always painted – where did you train and how did you get started?

I would say I've always been creative and had that urgency to make things. At school I excelled in art and design was told I should pursue it as a career. I did three weeks in art college but dropped out due to my difficult circumstances at the time, and   I didn't see art as viable career choice. Also, I longed to travel so signed myself over to the Royal Navy. After the Navy I had a long, hard think about what it was I wanted to do, and it always came back to the arts. I began quite blindly and modestly using old scraps of salvaged wood and industrial throw outs as canvas. I had a friend who worked in a garage at the time so he would fix me up with body shop aerosols paints. The work at the time, I guess, you would class as outsider, really surreal subject matter, little illustrated characters among elements and appropriated imagery from stencils made from an A4 printer. I didn't really have anywhere to display or showcase the work so I set about putting together a group pop up exhibition called “Jumble Fresh” in 2008 in Luton with friends that had carried on with their studies from school in various creative fields, and advertised on a few online platforms for submissions from other practising artists in the area. It was success and provided a much-needed platform for local creatives; off the back off this first show I set up a permanent studio space, “Jumble Fresh Creative Studios” in Dunstable Town where I continued with my creative practice along with hosting exhibitions and workshops.

What was it about the East End street scene that first inspired you, and what was your big break?

I spent a lot of time with my brother and friends in East London when I first left the navy. it had huge creative energy, especially Shoreditch with its pop up galleries and its street art scene around Brick Lane - huge posterised murals from the likes of Shepard Fairey had me in awe. The place was a big influence - the urban arts spoke to me particularly as being very raw and a seemingly self-taught practice executed in the same DIY mediums that I was already experimenting with (aerosols/stencils/raw canvas). Street art was my main and first major influence before the realisation that street art is in a way an evolution of pop art in terms of it challenging traditional fine art techniques and often appropriating images and commenting on popular culture. 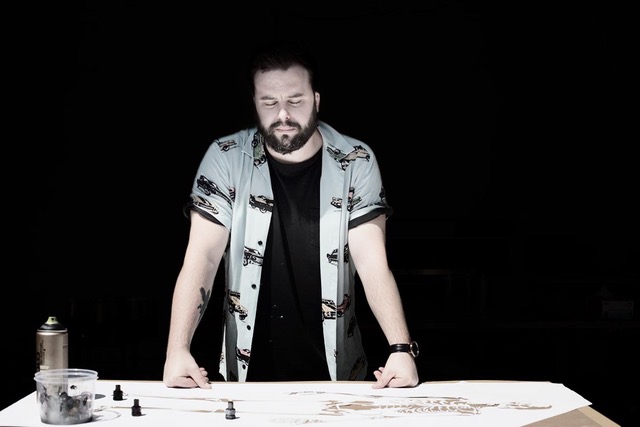 I guess my big break (in terms of wider recognition) came in the form of representation in 2011 from a fine art agency who helped establish my work in a number contemporary galleries which resulted in a run of successful solo exhibitions, and my association with The Dorchester Collection and recent residency/exhibition at 45 Park Lane.

But your studio is still not in the fashionable East End milieu where galleries abound, why not?

My new studio outside my hometowns of Luton and Dunstable is a cool, creative, outpost close to a nature reserve. It's a great environment to focus in and create new work. I've recently gone independent from my publisher of five years - I felt that the relationship had outgrown what they could offer me in terms of development, and after the success of 45 Park Lane that there was a pressure to over produce, so now I'm working closely (still in a conventional way) with specific contemporary galleries that have a great understanding of myself as an artist and articulate and represent the work well. However, I suppose in a non conventional way I also work with a well known London celebrity PR and marketing organisation who help me discover new and exciting non-gallery based projects.

The success of the show at 45 Park Lane was one of the driving factors that made me decide to become an independent artist and create a new studio space, mainly to safeguard myself and continue to develop as an artist without the temptation to overproduce original works, and I suppose the accreditation from such an iconic institution such The Dorchester Collection is quite a cool thing to have on your CV. It has also resulted in a few new notable collectors.

Pop art, from Richard Hamilton to Deborah Azzopardi, has been exploited over half a century. Can it develop further?

I think in its definition pop art will always be popular - consumerism, advertising celebrity still dominates many of our realities so will remain a subject for expression. There is always crossover in styles - it's whether that is intentional or not that is important, and to keep trying to develop your own ideas and the way you convey them. I think it will continue to develop. I touched earlier on how I believe street art is an evolution of pop art, and that's a significant development in style and delivery but still the same premise (maybe a little more antagonistic in its approach). Our interaction with pop culture through the digital world interests me and is probably the next evolutionary step from traditional pop art in some form. “Post internet art” is making grounds on this already.

What is the theme of your new collection, how many pictures are there and how long has it take to complete it?

Beyond is made up of a very small body of work and is more a of a tag line for the first pieces leaving the new studio, all of which have had more time allocated with focus on the application of imagery (going beyond previous works).  The two key pieces from this collection would be Tokyo Dreaming and Emergency Credit (illustrated). It took me a good few months to complete both. Tokyo Dreaming is a contrast piece based on my earlier silhouetted styling from some of my travels around the world, the familiar comic pop themes along with some more unfamiliar eastern themes, disciplined outline with contrasting neo-anarchic fill. Emergency Credit is a piece that references less known imagery and features symbolisation towards my childhood experiences as opposed to leaning too heavily on iconic themes.