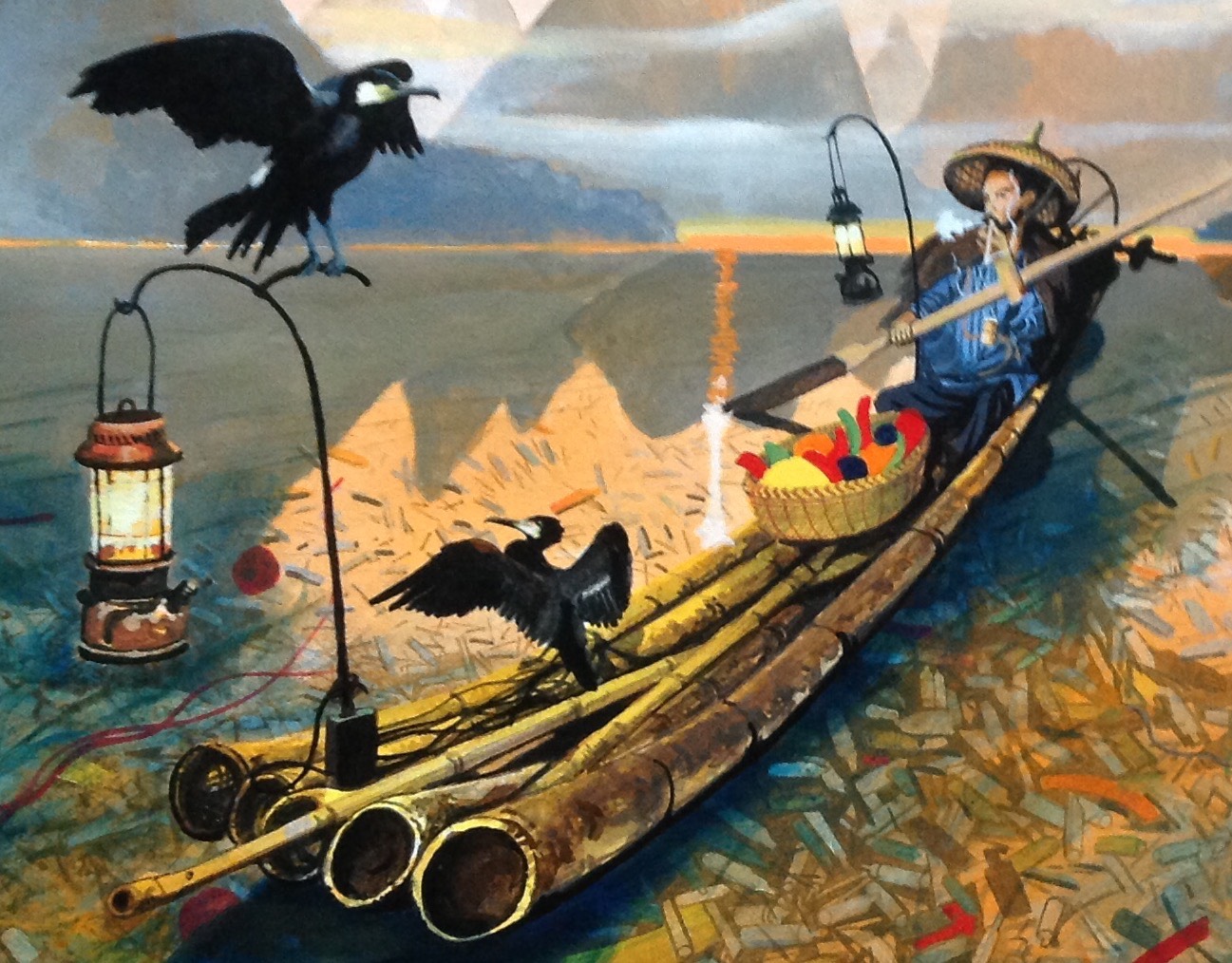 The artist, afloat on a Sea of Plastic

Tony Common, the graphic genius behind countless screen presentations, has brought his skills to create a disturbing body of work, Sea of Plastic, in the hope of helping to save wildlife from our waste. He talked to Simon Tait

A Japanese fisherman on the Nagara River is contentedly dozing in his small boat as his tame cormorants bring him his catch, but his basket is full of plastic. 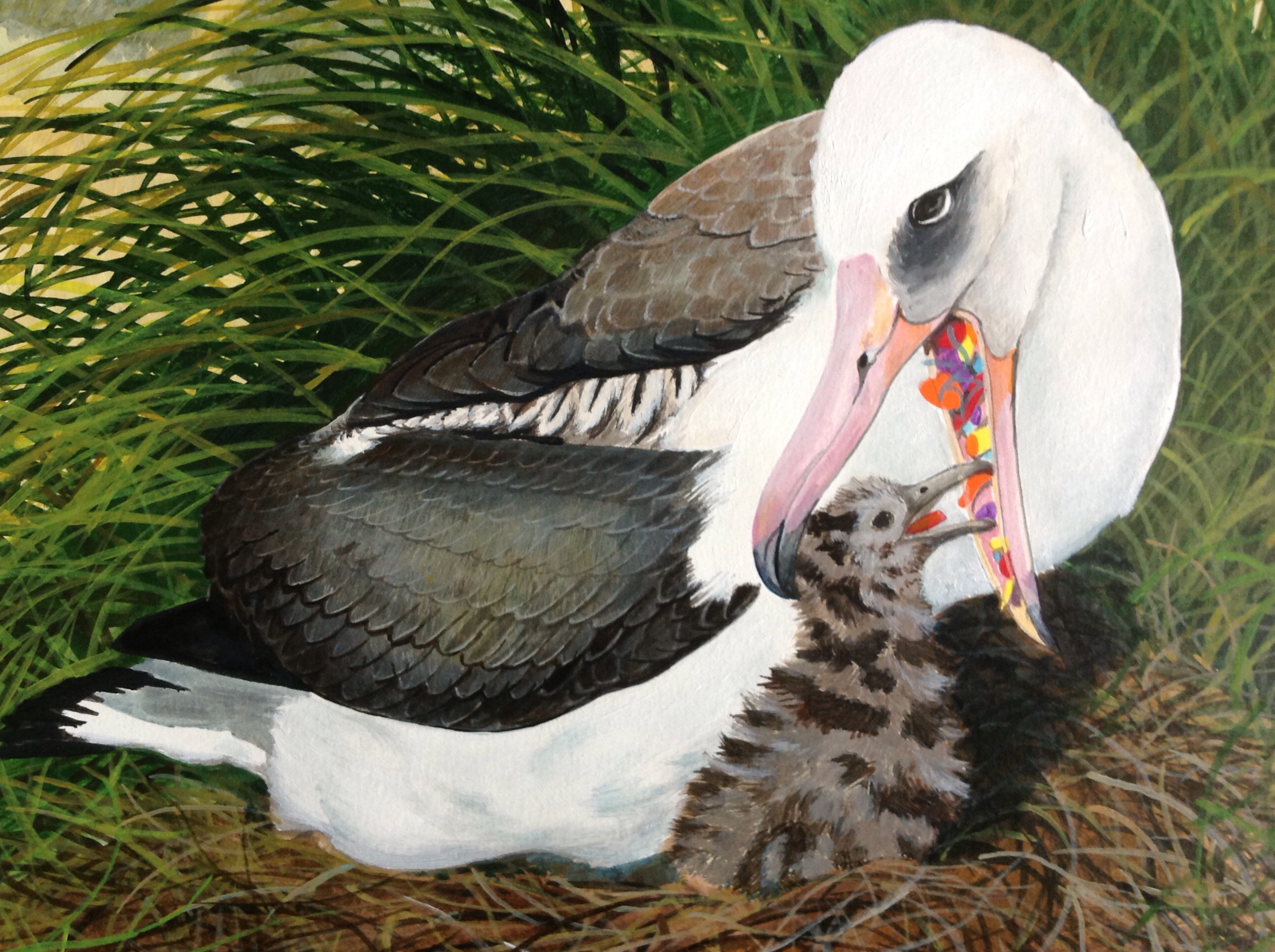 A female albatross, back from a long hunting expedition, settles into the grassy niche that holds her nest, and feeds her young the results of her quest. But unwittingly she is killing her own offspring. Instead of the small fish she believes she has brought them, she is feeding them the various pieces of plastic that have replaced the fish in the ocean off the southern coast of Australia. 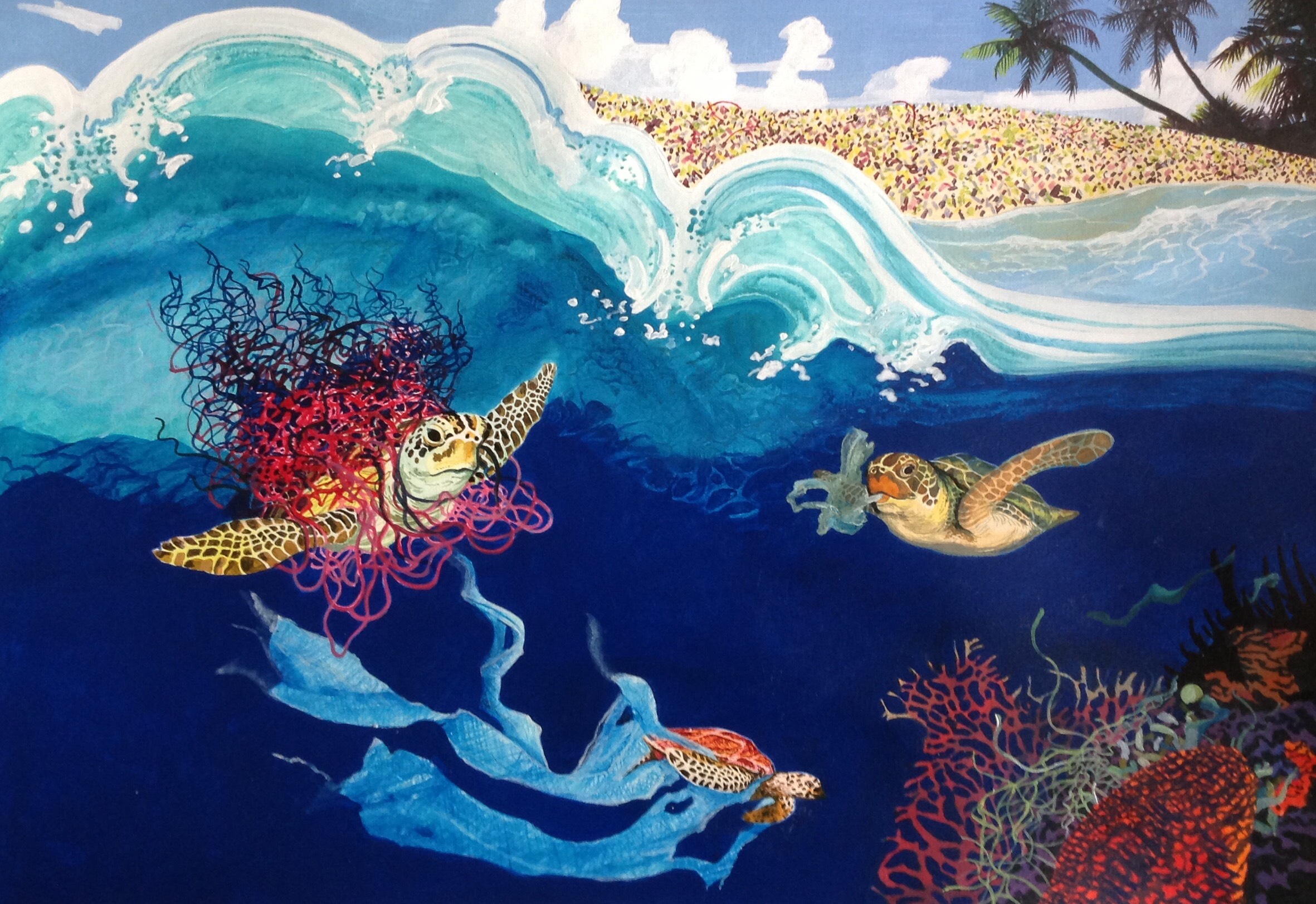 In a tropical ocean, turtles are beset by synthetic string and shredded polythene, and choke on discarded food wrapping, near a beach covered in multi-coloured plastic detritus.

These images are just three of 18 paintings by the artist Tony Common for a book he is making, Sea of Plastic. The images are lovely, bright colours and meticulously drawn details, but their beauty has an ugly message. They are the artist’s graphic lesson, aimed at school children, in the strangulation of nature by our plastic waste, a book and an exhibition that he hopes will tour the country.

“It is a terrible story to tell, and it seemed to me the only way of telling it was graphically, in a way that grabs kids’ imagination” Tony says. “I was inspired to do it by David Attenborough’s Blue Planet II television series at Christmas, in which he highlighted the terrible cost to wildlife of our carelessness.”

The stricken creatures he has been painting have brought Tony Common back to the wildlife that began his long career, one that included creating the sets for Dr Who, making videos for the likes of David Bowie, Michael Jackson and Queen, and, in his retirement, creating the famous street wall paintings for the Chelsea Arts Club.

As a schoolboy in Plymouth his skill at drawing birds came to the attention of the BBC's natural history unit, and he provided the title graphics for a children’s nature programme. His work was seen by the naturalist and artist Sir Peter Scott who became a mentor, and at 16 he went to Plymouth School of Art. Still a teenager, he went to London to study at the Royal College of Art, but was too busy with book design commissions to attend classes.

He was also freelancing as an illustrator for the BBC, making the graphics for programme titles, and after six months was asked to join the corporation’s graphic arts department. 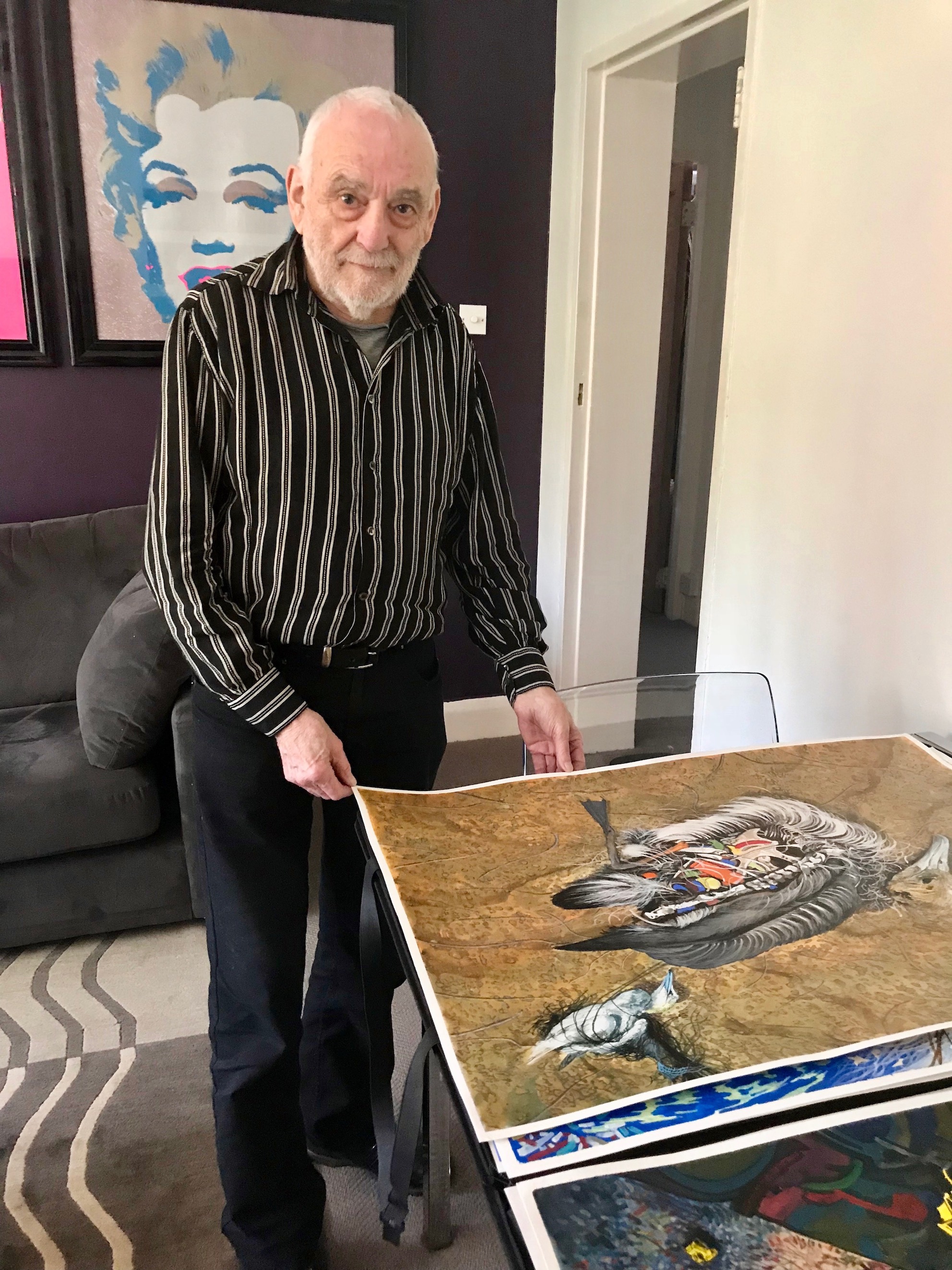 He worked on the first ever Dr Who, starring William Hartnell, in 1963. “You cannot believe how pathetic it was” Tony recalls. “We had to create the Gobi Desert in an area no bigger than a large table, with three cut-outs of dunes, a black drape to make sky (it was black-and-white television), the Tardis, four actors, two little piles of sand, and that was the desert. I said it was never going to take off.

But it was the start of a career at the BBC in which he rose to be head of the graphic design studio, working on most Top of the Pops episodes, devising backdrops in every style you can think of. At the other end of the spectrum, he made the detailed sets for I Claudius, including the mosaic floors that were hand-painted on canvas. “The shows were built in big workshops, the size of a football pitch, transported around Television Centre to the studio for the live broadcast, then brought back to store, so they got pretty knocked about during the series”.

He left the BBC to work in commercials with directors like Ridley and Tony Scott, Alan Parker and Hugh Hudson who went on to make careers in the feature films. He invented a technique of using large glass panels to paint scenery through which a camera could shoot, and struck a rich seam with the pop videos that thrilled fans through the 80s and 90s.

A keen member of the Chelsea Arts Club, he had been urged to decorate its white street walls for its famous summer ball, but he resisted – until he retired. He now creates a new coat twice a year, and once made a forest that stayed a whole year, changing seasonally. “I seem to be able to paint in the styles of different painters – all the art in the television series on the Pre-Raphaelites was by me. David Hockney once said I'd painted more pictures by him than he had”.

Tony never lost his early love for wildlife, and while working at the BBC he created a refuge for endangered species of birds of prey, winning an award from London Zoo for his work. As well as creating his Sea of Plastics series, he is working on exquisite pen and ink drawings of birds – “it’s detailed work, you have count the feathers”.

So this latest project is his own distinct work and comes from the artist’s heart. He has as yet no publisher, nor a gallery to start the exhibition in, but he's confident his message is one the public will approve of. “Attenborough’s film really got to me, how we're destroying the best things of this world, so I felt I had to do something. And what else can an artist do?”