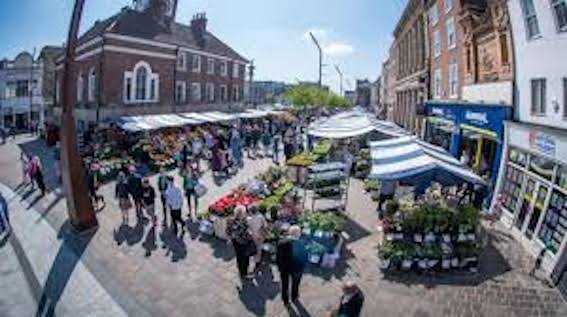 THE WORD ‘Centre of culture’ is not about space

says Reuben Kench, director of culture, events and leisure at Stockton-on-Tees Borough Council in response to a recent Taitmail input into the debate about cities and towns of culture, and our empty high streets

In the article Let’s have the High Street of Culture for Every Year, Simon Tait in Taitmail https://www.artsindustry.co.uk/taitmail/1466-taitmail-let-s-have-the-high-street-of-culture-for-every-year questioned whether the City of Culture really posed a size restriction, as Labour MP Yvette Cooper had claimed when she advocated an annual award for towns, giving places like Huddersfield, Bridgwater and Colchester a chance to forefront their distinctive cultural assets. This week the debate was broadened further as Radio 4’s Front Rowasked whether we should add Borough to the City or Town list, in the wake of Waltham Forest’s launch of their London Borough of Culture year.

Main image: Can Stocktom be a future Town of Culture?

I agree with the assertion that the “City of” accolade would seem to have lost the flexibility of the European “Capital of Culture” prize it mimics, though in practice a place can bid for the UK prize without enjoying a royal city charter or the presence of a cathedral. Sensibly, Phil Redmond’s brain child is framed in terms of “a cohesive areas with a clear central urban focus”.

But, if we’re looking to maximise culture’s unique contribution to urban life, is there an optimum scale of intervention?  And, as Taitmail suggested, is a winner takes all competition the right vehicle?

The move of retail consumption online and out-of-town has affected towns and cities alike and the reasons are well documented. And it’s not just retail consumption; watching movies, listening to music and even socialising is digitally enabled and allows you to be anywhere and on your own, safe, warm and connected only to those within your community of interest. The resulting empty units in every town and city threaten the underlying economics of land and property asset values and business rate revenues.

To some extent, cities have retained a critical mass of institutions and non-retail functions that sustain them as a place, functions that bring people together across demographic and socio-economic spectrums, like universities and civic bodies. Conversely, the homogenisation of the remaining retail offer in towns is more pronounced, where the distance to the next retail centre is small, shopping visits are frequent and for low value goods, and economies of scale drive out diversity.

Perhaps more invidious than the economic threat is the social threat of polarisation and the disintegration of communities of place. Inexorably, those with money (and cars) desert the shared spaces of towns and cities, while the public transport and public service dependent time-rich-cash-poor lower socio-economic groups remain. The condition is self-reinforcing as the average disposable income of those frequenting town centres declines, so the retail and service offer it sustains reduces, and thus the businesses that provided higher value products decline and the place becomes still less attractive to those with higher disposable incomes.

Watching, listening to, looking at and participating in cultural activity can and does appeal to people across the demographic and socio-economic spectrum. Cultural experiences are uniquely placed to foster and sustain shared identities and reinforce shared beliefs. Individual expressions of who we are, what we like, and what we oppose illustrate what we have in common and can connect people who are otherwise disconnected.

As communities of place reduce in significance compared with communities of interest, the need for shared experiences that strengthen the fabric of civil society and commonality with those who share the spaces in which we live, work and play is greater. While the identity of cities remains alluring, bolstered by notions of cosmopolitan sophistication and multi-million pound destination marketing campaigns vying for the city break consumer, towns are in precarious limbo – “neither something nor nowt”.  Perhaps boroughs are similarly lacking in contemporary purpose and meaning as places, lacking the drivers for interaction that sustain a sense of community. In making the case for towns, Yvette Cooper was surely making the point that distinctive cultural activities that bring people together, like Bridgwater’s Guy Fawkes Night party and Huddersfield’s music festival, should be the focus, not the scale of the conurbation.

Listening to Sam Hunt describe Waltham Forest’s use of artists who know the place giving voice to local people took me back to decades-old arguments for artists in residence and what we used to call “local arts development”.

The debate about competitions per se merely reminds us that it should always be about the journey. Sunderland, who lost out to Coventry for 2021, are already enjoying many of the benefits they sought to secure through the prize; institutions are working together, buildings are being converted, community pride rekindled, positive futures imagined, because the process of building a well-supported, rooted and potentially transformational bid was one which utilised the prospect of the accolade to inspire, align and galvanise a broad cross section of the people of the city.

Perhaps what we need is resources to make cultural opportunities commonplace, in every community and place, irrespective of scale. The prize “year of’” process may ensure that enough resources go into one place for a period, rather than being spread too thinly over all. So, is there an optimum size? The arts and culture can and do contribute to economic and social fabric of every place, but there are sizes and types of place where the changing patterns of consumption and interaction are having the most profound detrimental effect on social cohesion, and these perhaps are the places in which the prize money would make the most difference.