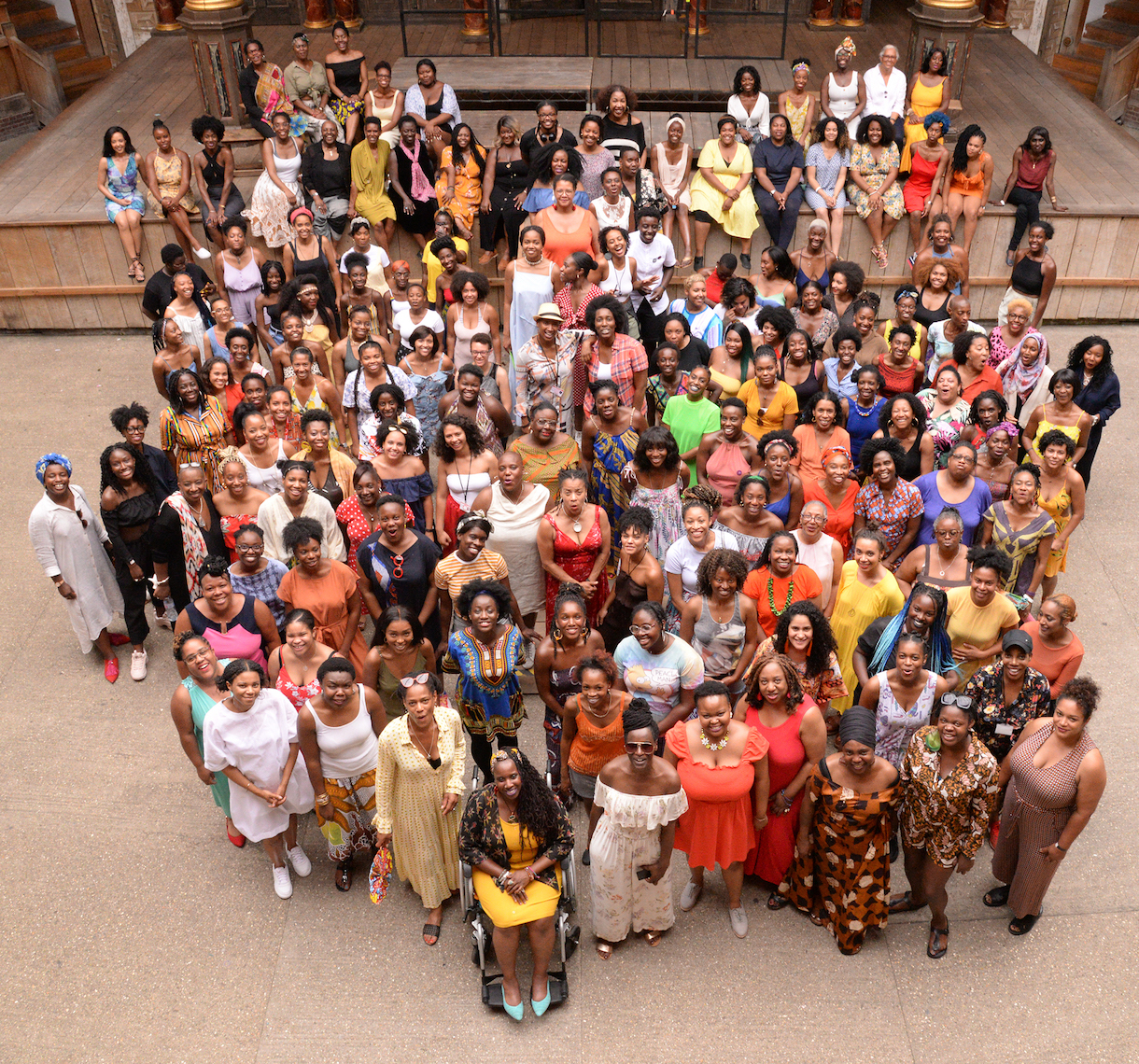 The black queens of our theatre

This image is a moment of history, a salute to the achievements of black women in British theatre. “It’s our celebration, putting a ribbon around it” says Stella Kanu.

Called #WeAreVisible, it was taken on the stage of Shakespeare’s Globe at Bankside in includes 250 of the most accomplished theatre makers in the country, on and behind the stage. All of them are women, all of them are black

The picture, by Sharron Wallace, records the emergence of BWiT – Black Womxn in Theatre (the spelling of “womxn” is to be inclusive, recognising non-binary people and trans women) says Ms Kanu, executive director of LIFT. “BWiT is an inter-generational bridge” she says “where black women in the theatre can advise and learn from each other, and enjoy our company”.

They were hosted at the Globe by the theatre’s head of research and scholarship, Farah Karim-Cooper.

The loose mutual help conference the photograph marks came into being last year in a water cooler moment, when Ms Kanu, then the executive director of Ovalhouse Theatre in Brixton, got into conversation with three other senior members of staff – Monique Baptiste-Brown, head of audience development, Annika Brown, then buildings project manager and now general manager of Theatre Royal Stratford East; and the writer Titilola Dawadu, Ovalhouse’s former learning and participation manager.

“It was accidental, but we were four fairly senior women recruited as the best people for their roles, and as slightly older I was learning about up-coming directors from them, of writers and other achievers, and I was able to talk about things that had previously happened – and we realized we had a unique connection” Ms Kanu says.

There are famous names among black women British theatre, including the actor Carmen Munroe, Yvonne Brewster, co-founder of Talawa, and the director Paulette Randall, but however happy in their work today many black female achievers often find themselves the only black member of a team. It can be isolating.

So to mark Black History Month last October, the four organised a networking symposium at Ovalhouse and over 150 participants registered – and demanded more. Two more were organised in March this year and June. “We often talk about ‘lack’ in the sector, but here were groups of women tapping into each other showing what they had been missing. Some of them knew each other from social networks, or simply from reputation, but here they were able to make a connection.

“Anybody can come - men, white men, white women… there’s lots of  tweeting going on, an air of celebration” says Ms Kanu. “We’re all working with less money, trying to do more. Our tradition now is social aims, there are huge demands on us and we're just doing it all the time. For me BWiT is the greatest success story – one of, similar for disabilities or LGBTQ people because hope also inspires other groups.”

Each gathering has a theme. For the first it was “Hopes for the theatre” and for the second the playwright Winsome Pinnock spoke about what and who inspires, not just the makers on stage but the enablers at front and back of house. The third concerned career projects, featuring Karena Johnson, artistic director of the Hoxton Hall theatre venue.

“This is something to celebrate, it’s unprecedented” says Ms Kanu. “We wanted to bring together all theatre staff and creatives across generations because we need to see each other, so many of us are experiencing isolation in our organisations and venues where we are usually just one or two.

“To be together in one moment in time is powerful for us and for our sector. We aim to drive a new conversation that celebrates and acknowledges the important role black women have played and continue to play in theatre and its diversity”

The first three #WeAreVisible events occurred at Ovalhouse, but the theatre is due to close its venue next to the Oval cricket ground soon to move to a purpose-built theatre complex, also in Brixton. So a new venue is being sought for the next gathering, which will mark Lynette Linton taking up her appointment as artistic director of the Bush Theatre in the autumn.

“It's a fantastic achievement for Lynette” Ms Kanu says, “but it’s an example of what can be achieved and we can all learn from that whatever part of the theatre we work in.”