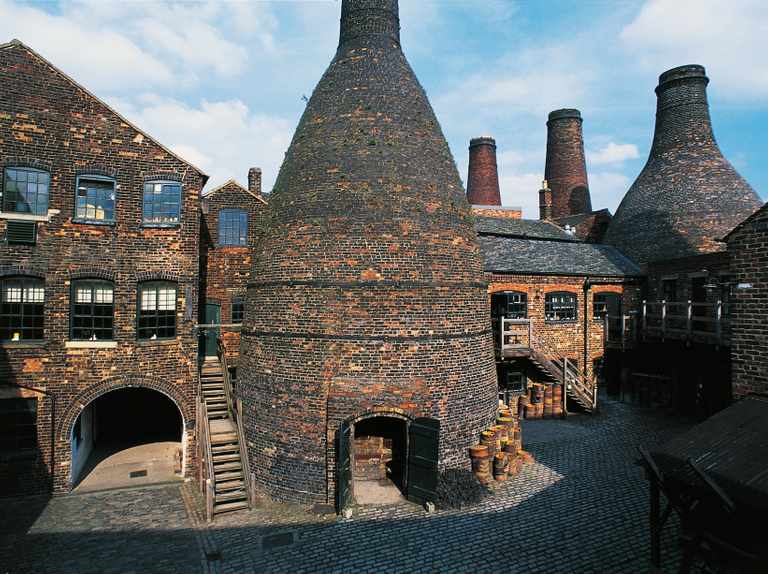 The original piece was posted a few hours after the redundancy notices arrived, with their usual gagging conditions, and over the following few days the story changed slightly - at first it made the assumption that without curators and most of the management the museums would have to close, which is only partly true - but not materially, and the issue remains the same: the devaluation of scholarship in our relationship with our history, and the commodification of the heritage.

The Grade II* Gladstone Pottery Museum (picture credit: De Agostini/Getty Images), with its inimical brick bottle kilns, which normally gets a healthy 35,000 visitors a year, opened as a coal-fired pottery in 1787 and became a working museum in 1974. Lately it has been used for the Channel 4 series The Great British Throw Down and last year’s Sky biopic about the potter Clarice Cliff, The Colour Room. The Potteries Museum and Art Gallery, where you can normally see the Staffordshire Hoard of Saxon gold, opened in its present premises in 1956, was expanded and enlarged in the 1970s and was Museum of the Year in 1982 at the height of the museological craze for industrial heritage.

What Stoke’s plan for them looks like is a badly thought-out last-minute solution to a budget shortfall problem, stuck on the end of a much larger social services rejig.

Stoke Council was hit by a shitstorm of reaction, and when she had recovered more than 24 hours after the story appeared its leader Abi Brown put out a lengthy statement (https://www.stoke.gov.uk/news/article/994/statement_-_stoke-on-trent_museums) in which she said her plan “supports the continued transformation of the city's museum and wider cultural offer”. Several twitterers equated the plan with the reports that the Attorney General wanted to find ways of overturning the jury decision to acquit those accused of criminally taking down the statue of a Bristol slave trader, the so-called Colston Four, but at base it’s about using, serving and understanding our heritage properly. The plan is out for consultation until February 14, except that the https://www.stoke.gov.uk/budget2022 link on the council’s Stronger Together Strategic Plan website doesn’t seem to work, and though the press release link does the document you find there doesn’t mention museums.

So here’s what is being proposed: The Gladstone Pottery Museum would be closed from October to April, effectively half the year, to make it available as a TV and film set which the council thinks will earn £125,000; both museums would be closed on Mondays and Tuesdays instead of being open seven days a week; a single staff of 5.5 would operate both venues; 19 permanent posts would be “deleted”, to use government argot; the changes would save the council £560,000 a year.

The 19 jobs to go include both ceramics curators, two business development personnel, two operation managers, a heritage manager and an audience development manager, reducing the museums’ capacity to carry out their tasks. The council doesn’t specify what the five-and-a-half remaining/appointed would do, but “curatorial expertise” would be available. The cafés and shops at both venues would remain open.

The museums community sees this as yet another attempt to wrest control of the heritage narrative from historians who have a dangerous propensity to wokeness, and so it might be, but it is just as likely to have been a Labour council putting such a plan forward as a Tory one with the government’s cuts getting increasingly draconian despite the pledges of levelling up for districts exactly like this.

There are plenty of other grim stories, such as Wandsworth’s where in 2014 the borough council simply shut its museum. The Battersea Arts Centre came to the rescue in 2016 taking on care of the collection and mounting changing curated displays in a “Moving Museum” programme. But losses during the pandemic closures have meant the BAC can no longer take on this responsibility, and the collection has now been handed back to the council which will be “working in partnership with local libraries and historical societies (to) explore how local communities can engage with the collection in their everyday lives”.

Wandsworth’s is not such a focussed heritage as Stoke’s, where something has to give. Here, the museums plan is part of a wider £154.4m investment in “services that protect and support vulnerable people most in need” which is for others to examine. But children’s centres will close in this rationlisation, senior social worker posts in the children’s mental health service will go, swimming lessons and the necessary instructors will be cut, according to the local daily paper. A total of 62 jobs will be deleted - a third of them in the museums - if the plan is approved, a plan that includes an increased grant from central government for social care and a 55p a week rates rise for council taxpayers.

To make up for shortfalls Stoke Council has decided to make the most of its assets, and the arts sector has become used to having to turn entrepreneur in the austerity environment. Even though barely half a million is being saved by this strategy, at least assets are not being sold as they have been by other local authorities.

What is vital is that the assets are recognised for what they are. Stoke-on-Trent’s pottery heritage is unique in the world. It is not still life, a scenery flat in front of which stories can be acted out: it is a living, breathing part of us that is still producing new work whose care and comprehension requires the infinite care of those properly trained to provide it.

But curators are not merely interpreters of a creative process; they are creatives themselves who use the objects with which they are so familiar and constantly learning from to tell the rest of us the stories of the potter's art as well as, in this case, Doulton, Pilkington, Wedgwood and the other great Staffordshire houses that created what the world knows as The Potteries.