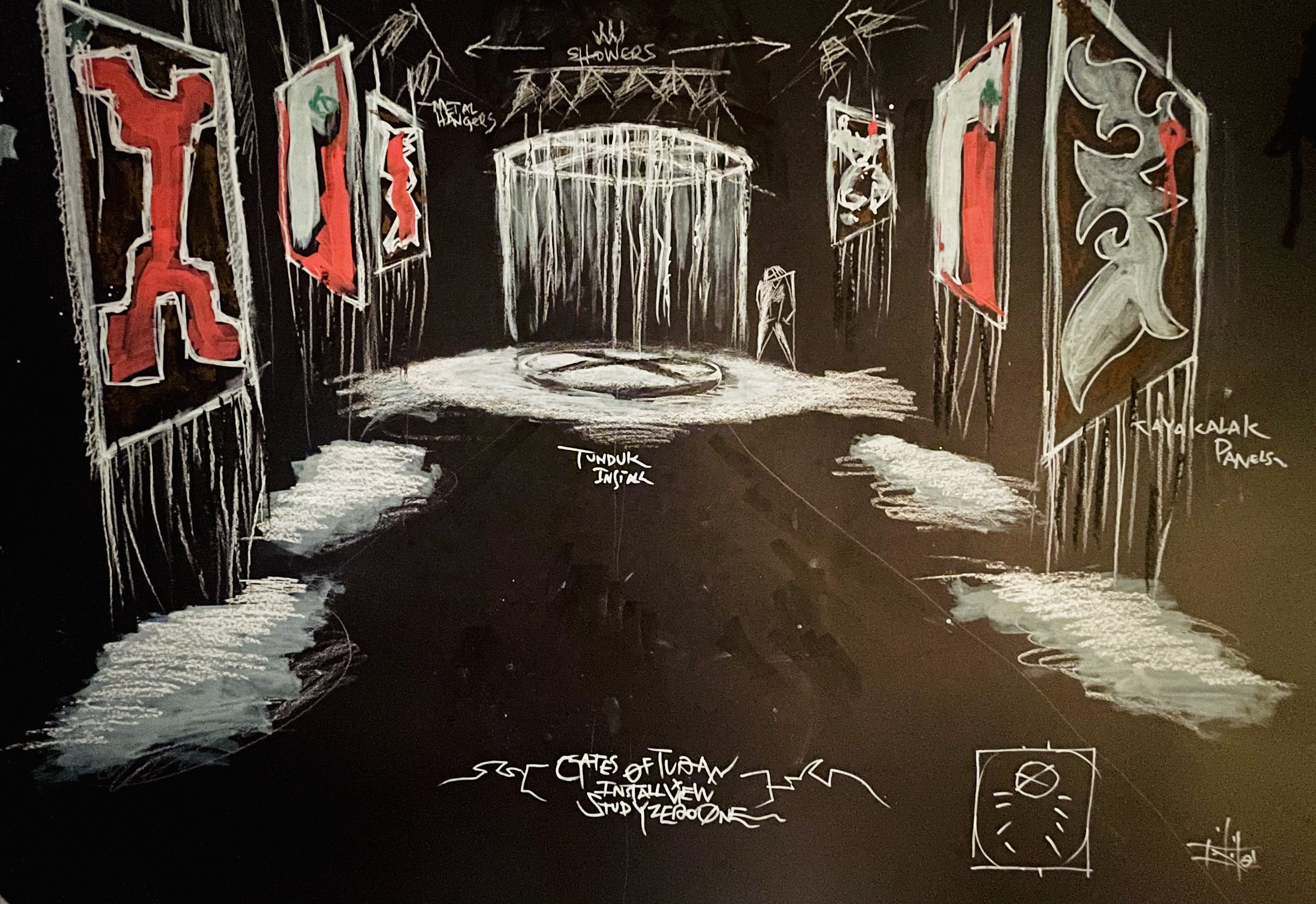 Janet Rady, curator of the Kyrgyz Republic Pavilion at this year’s Venice Biennale

Kyrgyzstan is a landlocked republic of 6m people surrounded by Kazakhkstan, Uzbejkistan, Tajikistan and China on the Silk Road. It was part of the USSR until it became an independent state in 1991. For the first time in its history it is to have a pavilion in the Venice Biennale, opening on April 23, with work by the Iranian-born artist Firouz FarmanFarmaianas the exhibitor and Janet Rady, a London-based expert in Islamic and Central Middle Eastern art, is its curator.

Why has Kyrgyzstan decided to have a pavilion in the Biennale this year?

The Biennale Pavilion gives an opportunity for a global audience to become more familiar with the country and its traditions. It is a country with a rich nomadic heritage which deserves to be better known internationally.

What is your connection with the region, and how did you get involved in this project?

As a specialist in Middle Eastern/Islamic art I have a deep understanding of the people of the region and their customs which for centuries have been closely connected with those of the Islamic world and more specifically their mythologies, embodied in the national epic of the Manas, which are connected directly with those of Iran (from the Shahnameh).

Firouz and I have been working together for over ten years and I was honoured when he invited me to be the curator of the pavilion.

Can you describe what will you be showing?

The artist will be showing Gates of Turan, a ten-piece kayakalak panel installation which comprises nomadic tapestries placed to hang as imaginary tribal banners - nomadic traditional felt-making techniques are here reinvented to serve the idea of a lost mythical unitarian mandala, travelling through hand-sewn designs of the Oïmo, a mythical visual vocabulary revisited by the artist and produced in collaboration with the Kyrgyz craftswomen.

These myths are closely connected to the Manas epic, and as such the banners symbolise the allied tribes of the warrior-hero Manas as he fought for freedom and independence. The kayakalak banners are placed as a deconstructed corridor around the tunduk centrepiece (the cupola of the Kyrgyz yurt), highlighting the importance of the crossed shaft that figures as Kyrgyzstan’s national emblem. 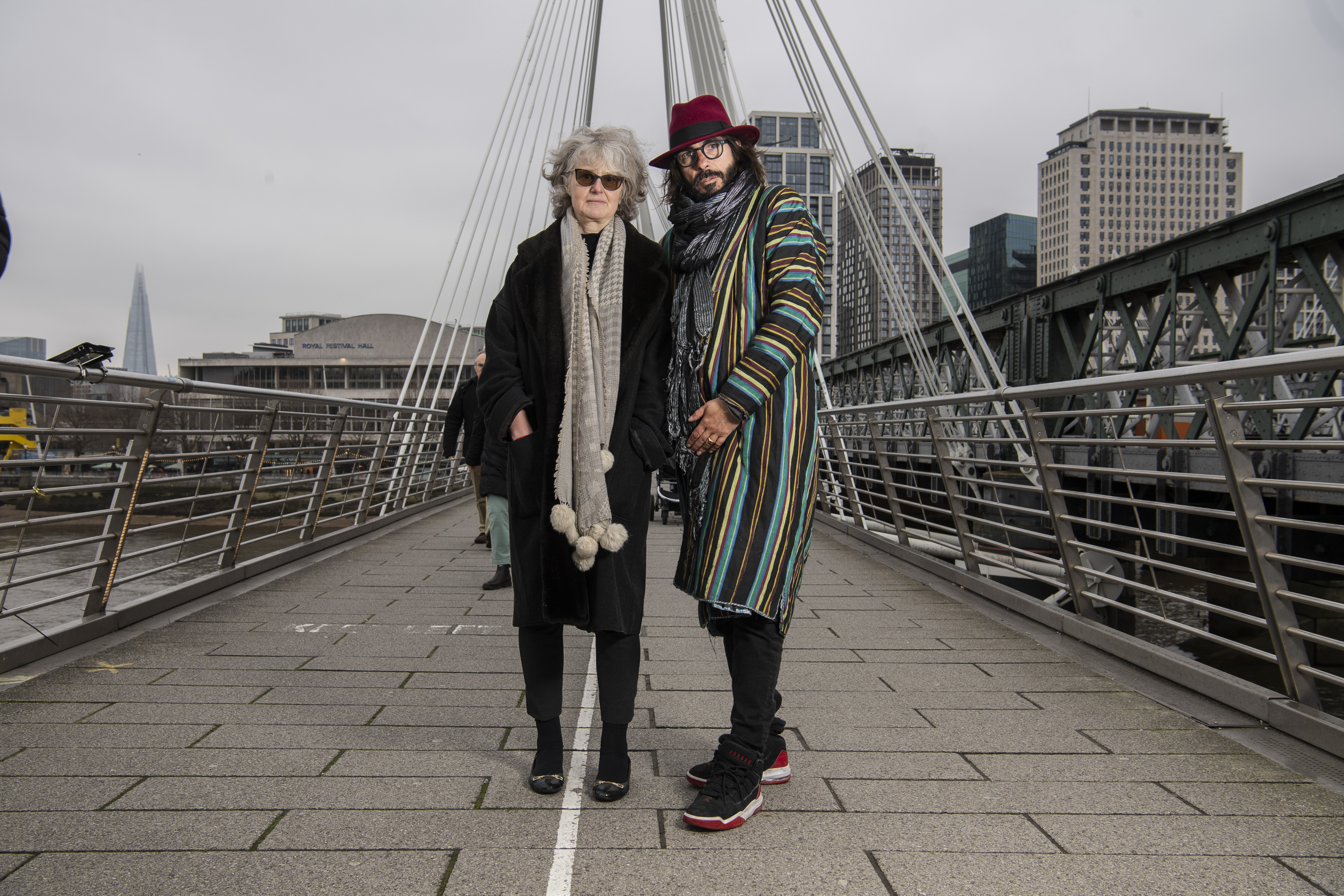 Above, Janet Rady and Firouz FarmanFarmaian in London. Main image, design for Gates of Turan

What can you say about the artist for Gates of Turan, Firouz FarmanFarmaian, and where is he based?

The artist draws inspiration from what he defines as a nomadic displacement, the result of early exile in his childhood following the Iranian Islamic revolution in 1979 that led him to investigate his clan’s tribal past - and in this instance - the hereditary ties linking him to central Asia, Kyrgyz culture and to the myths and epics related to the idea of Turan, the name for Central Asia.

Coming of age in the Parisian indie-rock and underground film scenes energised FarmanFarmaian with a fierce alternative approach to artmaking. After showing in New York and London in 2018 and 2019, he began to push forth installations that willingly transgress genres and boundaries into multivalent presentations.

In Marrakech, where he is partly based, FarmanFarmaian immersed himself within the local tribal and nomadic cultures. Here he articulated his post-tribal aesthetic through a sourcing-production process connecting with women of Southern and Northern Moroccan Amazigh heritage. Using processes inspired by ageless traditional techniques, FarmanFarmaian produced drawings, paintings and installations derived from wool and tent fabrics, thereby transforming archaic concepts into physical contemporary forms. These were shown at his exhibition Memorandum of the Unknown Path in Marrakech during the 1:54 Art Fair in 2020.

To elaborate on this ethnogenesis vision, the artist travelled to Kyrgyzstan in 2021. Informed by the close cultural ties to the land of his birth, he channelled his ancestral heritage into researching current day crafts practices inspired by the Kyrgyz the Manas. Travelling into the remote highland regions of Yssik Kol and Naryn his immersions within the tribal and nomadic cultures resulted in a collaboration with the local craftswomen and the creation of textile-based installations through a multiplicity of elements including raw yak wool, felt, Kyrgyz yurt structures and locally sourced pigments. He is partly based in Spain.

How representative of Kyrgyz contemporary art is the exhibit?

The exhibition mirrors the practices of Kyrgyz artists, such as Nurzat Zheenbek, in transforming the materials directly sourced in the regions, such as felt, into contemporary art. They are always closely linked to craftsmanship; for example Nurzat’s mother is one of the biggest builders of shirdak textiles in the region. Firouz is also working with the local Ilgeri foundation to create NFTs inspired by the national symbol present in the installation around the idea of tunduk.

Is Firouz known and exhibited there?

Firouz is well known in Kyrgyzstan since he was announced as the cultural ambassador and representative of the Kyrgyz Republic Pavilion. He has received many proposals as a result and following the Biennale he is to show in the Museum of Fine Arts in Bishkek in conjunction with the Ilgeri Foundation, to highlight the dynamism of the local scene.

Have you curated at the Venice Biennale before, and what do you think the exhibition will do for better understanding of Kyrgyzstan and its art?

This is the first time I have curated a national pavilion at the Biennale, although I have previously presented artists in the context of the last two Biennales. Kyrgyz arts have had a difficult time recently due to limited resources.

The Biennale is the foremost global art event and by shining a light on Kyrgyz crafts and heritage in this contemporary format, together with the planned educational programme in the Pavilion, it will undoubtedly lead to a better understanding of Kyrgyzstan and its art and help to place it in the context of Asian art in general.

What will happen to the Gates of Turan after the Biennale?

The installation will stay intact and it is hoped will enter a private or public collection, to be determined. As the Biennale is a non-commercial event, no part of it may be sold during the exhibition.