A new exhibition at the Tate presents one of the most important British painters of the 20th century showing his influence on other painters, including Lucien Freud.

But then the catalogue resurrects the crazy notion raised 20 years ago by a crime novelist that the artist was Jack the Ripper. We’re talking about Walter Richard Sickert, a fantasist (what artist worth their salt isn’t?) who seems to have been fascinated by the demi-monde of Camden where murder was not infrequent, but was a prolific painter who used the techniques of French Impressionism to interpret the seamier side of British life. He even seems to have teased the police by writing them letters purporting to come from the Ripper, even though Sickert, then in his twenties, appears to have been in France sitting at the feet of Edgar Degas in 1888 when the murders were committed.

But there is another exhibition opening in a national museum about another painter whose reputation has at least been distracted, this time during his own lifetime and for which he, too, only had himself to blame.

Undoubtedly Alfred Munnings, especially in his seniority, was an opinionated curmudgeon who at the age of 70 in a few minutes alienated most of the next generation of artists with his valedictory speech as president of the Royal Academy inveighing against his bête noir, Modernism. Munnings, by then twice a knight, was standing down as president (having defeated the more fashionable Augustus John at the election in 1944) after five years as PRA at the punctuation mark of the academy’s year, the annual dinner. The speech was broadcast to millions live on BBC radio.

Munnings was clearly drunk when he rounded on the current heroes of the art market of the day Piccasso, Matisse and Cézanne, who he said had “desecrated the meaning and violated the purpose of art”. Painting, he said, was meant to “fill a man’s soul with admiration and sheer joy, not to bewilder and daze him”. He glanced at Winston Churchill, the guest of honour, as he reported that his old friend had once said to him “Alfred, if you met Picasso coming down the street would you join with me in kicking his…?” to which Munnings said he replied. “Yes sir, I would”. Churchill wrote to Munnings afterwards to deny they’d ever had the conversation.

But with that speech, one critic wrote, Munnings “erased himself from the pages of art history going from the pinnacle of the British art establishment to a cultural nonentity virtually overnight”. 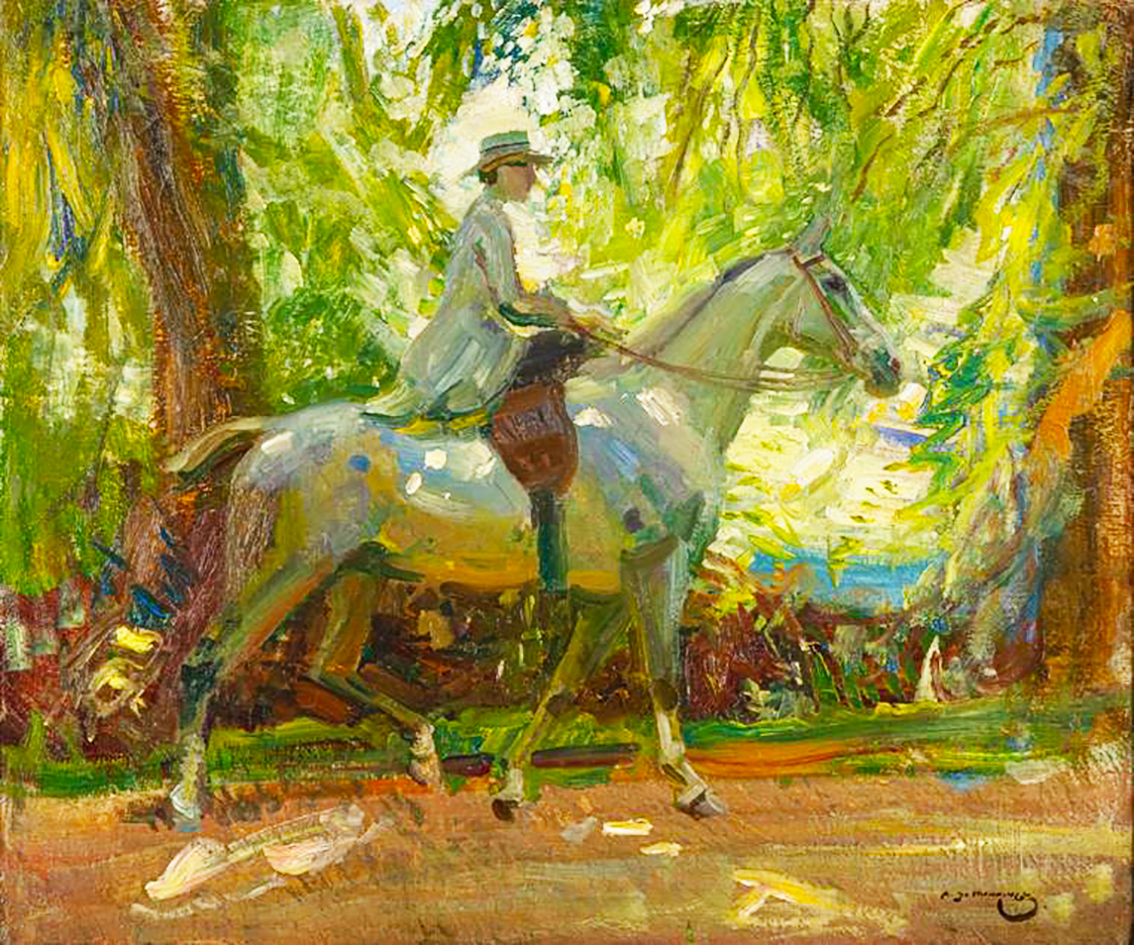 Munnings was known as the best horse painter after George Stubbs, and his rehabilitation takes the form of an exhibition opening on May 24, not at a museum of art but at the National Horseracing Museum at Newmarket (it runs until June 12) presented by the British Sporting Art Trust, and with 40 works - some of them not seen in public before - it is the most comprehensive examination of Munnings’s work covering 60 years.

Munnings was born in 1878 the son of a miller, at Mandham Hill in Suffolk, the heart of Constable and Gainsborough country. At 15 he became an apprentice lithographer and went to evening classes at Norwich School of Art where he fell under the spell of Constable, Cotman and John Crome. Still an apprentice he bought an old carpenter’s shop and turned it into his first studio, and 1899 had his first paintings accepted for the RA Summer Exhibition. He became friends with Harold and Laura Knight and settled with them in Newlyn, Cornwall, entranced by the light. Sixteen years later Munnings had just become a Royal Academician and was able to engineer the election of Laura Knight as the first female RA since Angelica Kauffmann in the 1760s.

The bad sight in one eye excluded him from service in the First World War, but he went to France as a war artist and his work, often featuring horses, enhanced his reputation. Munnings was a social success, a popular performer of folk songs at the Knights’ soirées, and not a bad poet. But he had a reactionary stripe that made him attempt to sue Stanley Spencer for obscenity, even though he thought Spencer was a remarkable and skilful artist.

The pictures have come from the kind of horsey collections you would expect: the Household Cavalry, the Jockey Club, and the museum his widow set up at their Essex home, but many come from private collections. Munnings was a successful painter early on and he was never short of commissions, but this exhibition has the pictures he painted for his own pleasure: his sweeping landscapes, scenes from the hunt, bucolic village tableaux, equestrian portraits, the rocky shoreline of Cornwall, his wife Violet, daughter of a horse dealer and an accomplished rider herself, delivered in the sweeping strokes and warm light that came out when he was painting for joy. The exhibition is called A Life of his Own, and before going to Newmarket can be seen at the Osborne Studios Gallery in Motcomb Street SW1X 8JU until May 14.

I for one will never forgive Munnings for his stubborn refusal to see the path ahead of art and painting and condemning from the establishment heights that which he could not understand, but in his genre he was masterly. And the market speaks.

The catalogue by Katherine Field, the curator at the British Sporting Art Trust, harks back to that speech in 1949 believing that at long last it is a thing of the past.

“Unfortunately” she writes “the ‘sensationalism’ of the event, which certainly made good copy, served to cloud the artist’s achievement and deflect from serious and in-depth consideration of his work. More recent moves to reappraise the artist without this extraneous ‘noise’ have placed the focus back onto his consummate artistry and put him firmly back into the frame. The present exhibition continues this positive trend. Meanwhile his prices in the saleroom soar as proof of his enduring popularity.”