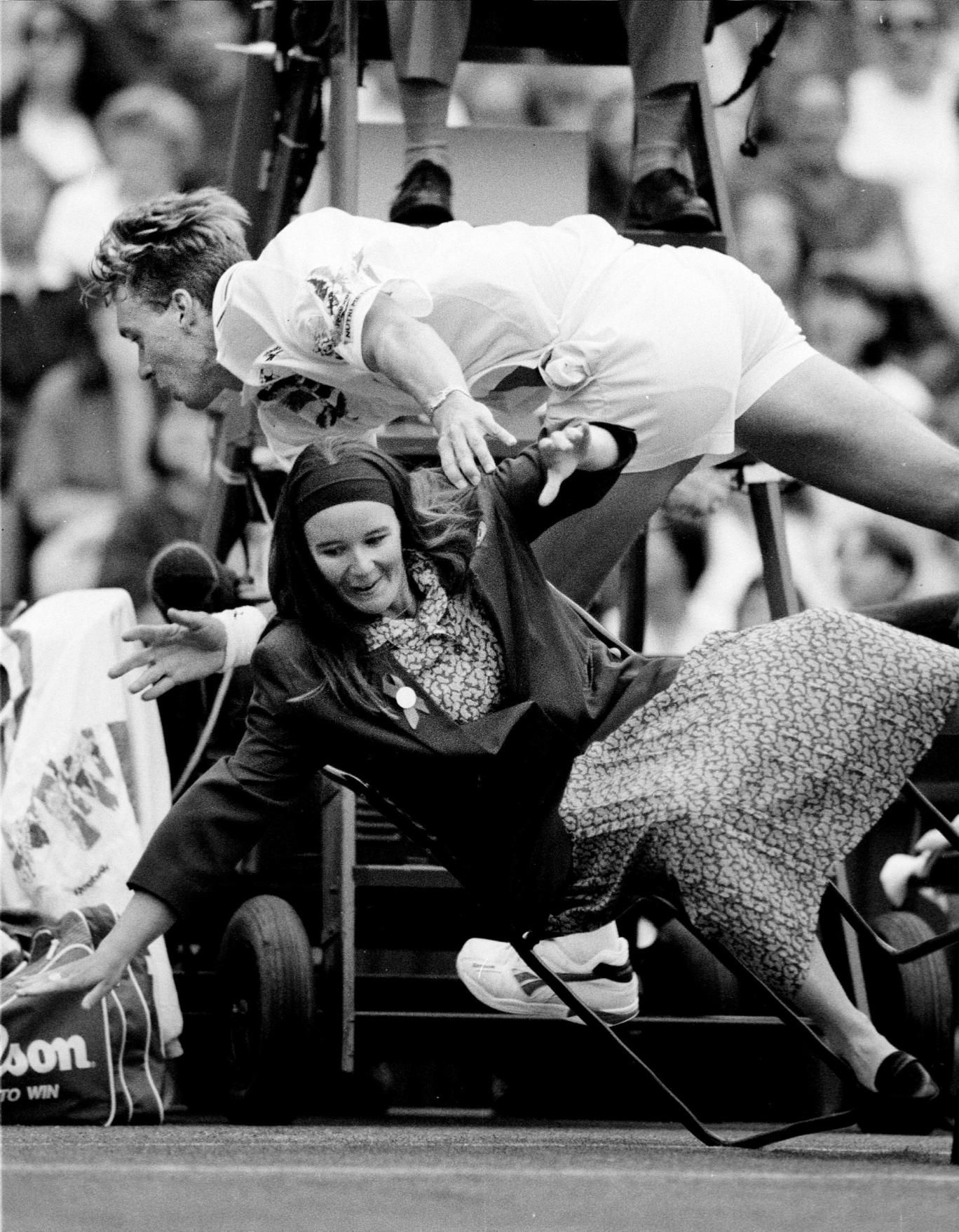 Wimbledon hopeful crashes out, 25th June 1993, by David Ashdown for The Independent

David Ashdown the was multi-award winning chief sports photographer for The Independent and the Independent on Sunday for 25 years. During his 43-year career he attended thousands of football and rugby matches, he accompanied the England football team around the world and travelled with the England cricket team on tours to Australia and the West Indies, which he considers to be among his favourite sporting assignments. He covered eight Olympic Games and must be sick and tired of strawberries after 40 appearances at Wimbledon.

He was asked recently if he had a favourite Wimbledon picture. “The one that gave me the most satisfaction was taken in 1993 on the Centre Court in the early evening. I was sitting watching Chris Bailey who made a cross court pass and the momentum was taking him towards the umpire’s chair. I grabbed my Nikon F4 with a 300mm 2.8 lens, it was set at 2.8 and it was manual focus, and I started to take pictures - he missed the umpire’s chair but knocked the net cord judge over, a one off because it never happened before. and will never happen again because there are no longer net cord judges”.

The Independent’s ground-breaking approach to photography created shock waves in the more photographically restrained newspapers in Fleet Street. The Independent pictures were used across many columns benefiting from the Michael Crozier design and fully exploited by the first picture editor, Alun John. The style dwarfed pictures used in the other broadsheets so that the reputation of The Guardian for good use of pictures was challenged and it was forced to review how images were used. The same self-analysis was going on at The Times and Daily Telegraph to the benefit of theirphotojournalists who finally felt that they had been recognised as serious contributors to the papers and not just to provide space fillers or images as line breaks.

Ashdown took what for many photographers was a traditional route into newspapers and joined the industry as a messenger for the Keystone Press Agency, all the time pursuing photography as a hobby and taking pictures of pop groups and motorcycle racing in his spare time. In 1972, after spending a couple of years in the darkroom as a photographic printer, Keystone promoted him to a full-time photographer.