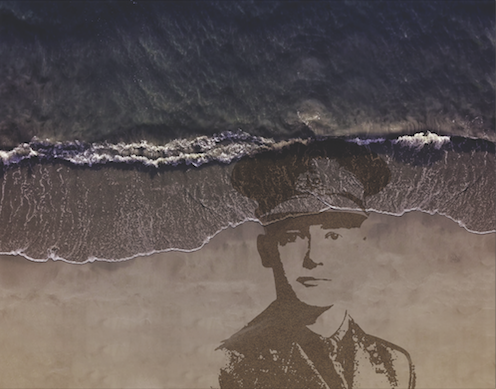 She was invited by film director Danny Boyle to write the poem as part of his 14-18 NOW commissioned piece, Pages of the Sea, which will see thousands gathering on beaches as a national gesture of remembrance. The title is taken from the sonnet’s last line.

THE WOUND IN TIME
It is the wound in Time. The century’s tides,
chanting their bitter psalms, cannot heal it.
Not the war to end all wars; death’s birthing place;
the earth nursing its ticking metal eggs, hatching
new carnage. But how could you know, brave
as belief as you boarded the boats, singing?
The end of God in the poisonous, shrapneled air.
Poetry gargling its own blood. We sense it was love
you gave your world for; the town squares silent,
awaiting their cenotaphs. What happened next?
War. And after that? War. And now? War. War.
History might as well be water, chastising this shore;
for we learn nothing from your endless sacrifice.
Your faces drowning in the pages of the sea.

“I hope that Carol Ann Duffy’s poem will be something that you’ll read privately as individuals, or with friends, or publicly amongst people on the beach on 11 November” Boyle said. “Poetry in the First World War was such an extraordinary artform – it reported in the way that television does now on experiences that were unimaginable to the people at home.”

Most of the people who served in the Great War left by sea, and on Sunday, November 11, people around the British Isles will be invited to beaches to take part on a series of community-led events, including readings of The Wound in Time. The image here, by sand artists Sand in Your Eye, is a large scale portrait of a casualty from the war which will drawn in the sand round the coast, and the public will be asked to create silhouettes of people in the in the sand of memory of lives lost in the conflict.

The commission is the culmination of five years of commissions by 14-18 NOW marking the First World War’s centenary, supported by the National Lottery and DCMS.