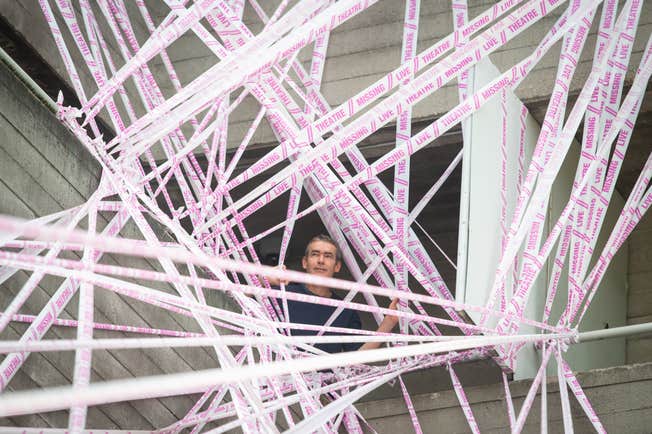 The government last night launched a £1.57bn scheme to rescue the UK’s cultural institutions from the brink of collapse caused the Covid-19 pandemic.

The package was first announced in a late night tweet by Chancellor Rishi Sunak, saying “The show must go on” as he introduced “a world-leading £1.57 billion rescue package to help cultural, arts and heritage institutions weather the impact of coronavirus”.

The Prime Minister, Boris Johnson, said the UK’s cultural industry was the beating heart of the country: “This money will help safeguard the sector for future generations, ensuring arts groups and venues across the UK can stay afloat and support their staff while their doors remain closed and curtains remain down”.

Main image: over the weekend theatres across the country were wrapped in pink tape to highlight their plight

The fund includes £880m for theatres, music and dance venues, museums and gallerfies in grants and £270m in repayable loans through DCMS, and £111m for traineeships. Repayable finance for the loans will be issued on generous terms tailored for cultural institutions to ensure they are affordable, the government’s statement said. There will also be £33m for the arts in Northern Ireland, £97m for Scotland and £59m for Wales.

The government and culture secretary Oliver Dowden in particular have been under increasingly intensive pressure from the arts and heritage sector to come to its aid, with some theatres already closed and others making redundancies.

The announcement was welcomed by the Creative Industries Federation as a seismic step forward as the sector was teetered on the brink of collapse. “This could be the game changer we need” said its CEO Caroline Norbury. “The voice of the creative sector has been heard loud and clear by the government and we warmly welcome their response” she said.  “This investment acknowledges the mission critical role that the UK’s creative industries will play in recovery and growth in all parts of the country.

“However, while this support will rescue many, so much has changed during the pandemic; there won’t necessarily be an easy return to normal. It is particularly heartening to see the reference to supporting freelancers, who are a phenomenally important part of the creative industries ecosystem. “

The announcement comes a day after lockdown was lifted on pubs, restaurants and hairdressers, and guidance for a phased return of the performing arts is expected later this week.

The funding package does not address the fundamental problem for theatres and concert halls of social distancing requirements, which are preventing performance venues from welcoming audiences in enough numbers to make them financially liable. Even 1m distancing can only allow a maximum of 70% capacity when 85% will be needed, and it is hoped this will be addressed in a further announcement expected later this week. However, culture secretary Oliver Dowden said an end to distancing in theatres was still "some way off", and cast doubt on the possibilities of pantomime, a vital earner for theatres, returning for this Christmas.

Arts Council England’s chair Nicholas Serota said the package was a very significant investment helping the nation to recover, and Julian Bird of Theatre UK and the Society of London Theatre said the funding was hugely welcomed. “Venues, producers and the huge workforce in the theatre sector look forward to clarity of how these funds will be allocated and invested, so that artists and organisations can get back to work as soon as possible” he said. Royal Opera House CEO Alex Beard said the package was a “vital next step on the road to recovery for the industry and will help to support and sustain the UK’s vibrant arts ecology through this crisis”.

The RSC’s artistic director Greg Doran and executive director Catherine Mallyon said they were pleased and relieved at the announcement. “We hope this investment will provide meaningful support for the whole sector: for the skilled workforce who create world-class theatre, and for theatres and companies at every scale throughout the UK.  We are all ready to be part of a powerful civic, emotional and economic recovery for the country, and will be invaluable contributors to the UK’s ability to re-emerge from the pandemic locally, nationally and on a world stage” they said, adding: “We look forward to receiving the detail of the support package when we will see in full how this will help the survival of the sector, and support our next steps to welcoming audiences back to live theatre.”

There was also a joint statement of welcome for the package from the directors of Tate, the Science Museum Group, the Natural History Museum, the National Gallery, the British Museum and The V&A. “Our national museums are among the most entrepreneurial in the world and the economic impact of COVID-19 has proved particularly damaging to our finances. Emergency assistance this year will enable us both to care for the collections and secure safe, free access to our galleries” the statement said. “We now look forward to engaging with the Comprehensive Spending Review to secure a longer-term financial settlement, with a truly sustainable balance of self-generated income and government funding”.

The Musicians' Union's general secretary Horace Trubridge gave a cautious response, however. "it is vital that our members are able to survive this closure period, which will be far lengthier than for most other workers. 1 in 5 of our members have told us that they may leave music for good if they do not receive further financial support" he said.

"We are therefore urging the government to extend the SEISS (Self-Employment Income Support Scheme) and the furlough scheme for creative workers until at least the end of the year. Crucially, 38% of our members do not qualify for either of the Government’s assistance schemes so we are also asking that excluded musicians are able to apply for some of the money that has been announced today."

Future Arts Centres, which represents over 100 smaller cultural venues, last week sent the culture secretary and Chancellor of the Exchequer a proposal for starting the recovery at arts centre level. Its joint chairs, Annabel Turpin and Gavin Barlow, welcomed the government’s announcement “For the arts to revive and grow across the country" they said today "the government and Arts Council England must work closely with local arts centres, which provide employment, training, education and entertainment for millions of people, from the most rural settings to the hearts of our cities. We look forward to working closely with Arts Council England to ensure support is distributed to the people and communities where it will make the biggest impact”. https://futureartscentres.org.uk/arts-centres-and-organisations-will-be-essential-to-post-covid-recovery/

However, culture select committee chair Julian Knight said this was only a first step to prevent some of our major cultural institutions from going under. “This money is welcome and should take some out of the danger zone” he said. “But to secure their long-term future there needs to be a target sector deal, possibly involving more generous tax breaks”.

Jo Stevens, the shadow culture secretary, said the package was too little too late for some organisations and the government needed to act quickly to save those on the brink of permanent closure.

The Prospect union, which represents museum and gallery workers, had been warning the government of the perils of inaction. ““It seems like the government has finally decided to act, but the devil will be in the detail” said its general secretary Mike Clancy.“The government must start to pump money into organisations in the sector this week if we don’t want to see more job losses and employers folding. There can’t be any more foot dragging.

“Now the government have shown they are willing to act on this - it is time for them to act on the ‘forgotten freelancers’ too. These workers, so unfairly left out of government support schemes need some support too.”