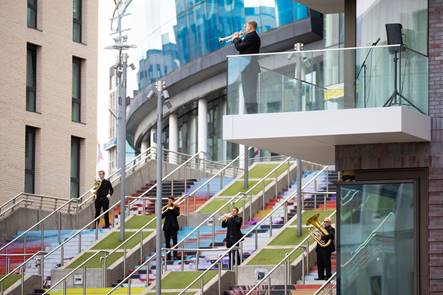 Concert to shop by, courtesy of the RPO

Weekend shoppers and residents in Wembley Park were surprised to be serenaded by musicians from the Royal Philharmonic Orchestra (RPO) with live orchestral music played to an unsuspecting audience  in London’s newest creative neighbourhood.

It was the players first live appearance together since the lockdown began in March, and their first collaboration since it was announced last year that the RPO would be moving its headquarters to Wembley Park, London’s newest creative neighbourhood. 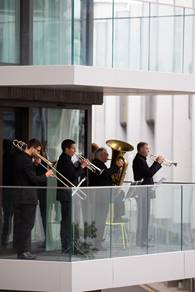 To enable social distancing, small ensembles of string, brass, wind and percussion players appeared in the open air from the Beton Building’s balcony, on the Spanish Steps, and in London Designer Outlet’s Retail Square. They played a mixture of classical favourites and pop classics associated with Wembley Park’s iconic venues, and by the end of the weekend 38 musicians had played for the first time at Wembley Park.