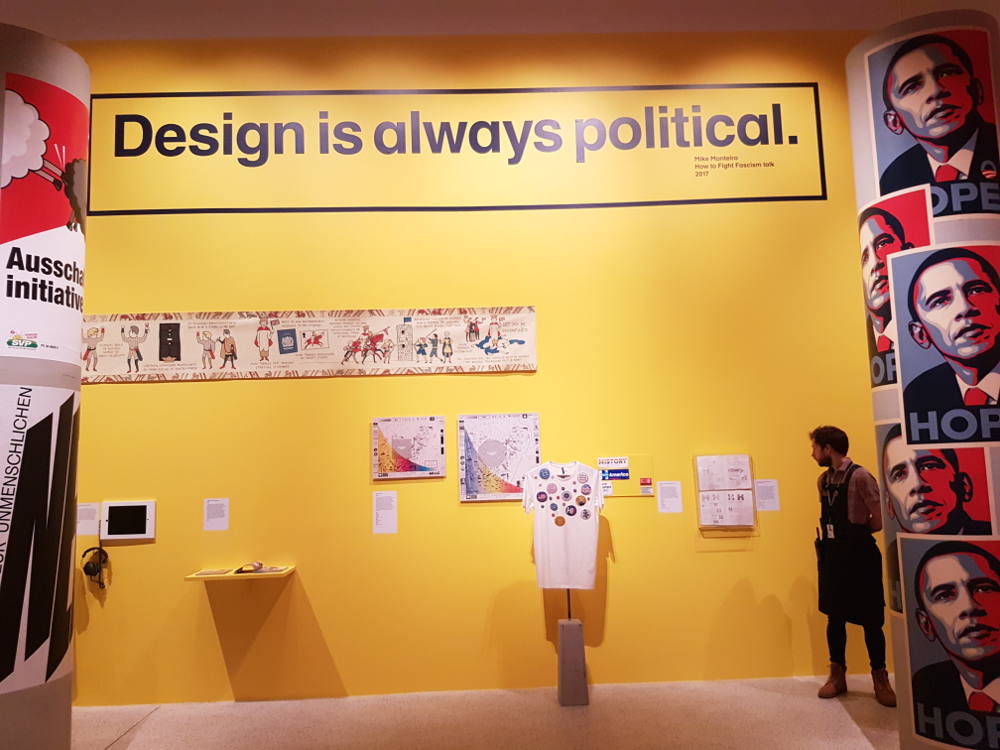 The Design Museum staff will turn up for work on Monday with a spring in their steps, knowing that the most troublesome exhibition in its short Kensington High Street history, Hope to Nope: Graphics and Politics 2008-18, has ended.

Thirty thousand people have been to what started out as a triumph, a statement about how design has “played a pivotal role in dictating and reacting to the major political moments of our times”. But in a stunning irony, it became the subject of the very kind of protest it was celebrating, and admission which cost £12 is free for the last few days.

On August 2, 12 days before the end of the show which had been running successfully since March, 20 designers turned up to remove their exhibits because they had discovered that on July 17 the museum had, separately from the exhibition, hired its atrium space out for a function to a company called Leonardo which as well as making aircraft, space systems and information systems, manufactures defence systems. It’s an arms company.

“I’m very disappointed in the poor judgment that the DesignMuseum in London displayed by renting their space to a company which manufactures military arms while simultaneously hosting an art show of activist images” wrote the street artist Shepard Fairey, who designed Barack Obama’s Hope poster in 2008 (that featured in the Design Museum then). “I have made many pro-peace images as well as art that is critical of the arms industry, so the museum’s actions are disturbingly contrary to my values”.

The museum has been belligerent in its defence. “Professional activists whose work didn’t feature in the exhibition took the view that the museum had acted wrongfully and were quick to exploit the situation” said its co-directors, Deyan Sudjic and Alice Black, in a statement. “The museum is now being targeted by a group of activists, not all of whom are being accurate in their presentation of the situation. We are in the midst of an argument not of our making. We will not be seen as an easy target and a surrogate for the real targets of these campaigners. We do not want our programmes to be co-opted by the agenda of others and we stand by our curatorial independence”.

They clearly feel there’s been some provocative mischief-making, and that as a charity getting 2% of its income from the public purse it has to raise funds from the private sector without taking political stances. But raising it from an arms dealer in the middle of an exhibition about “political moments of our time” was at best careless, at worst cynical.

But protests about exhibitions, sponsorships and museums’ collections are becoming commonplace: the Elgin Marbles at the BM, then BP sponsorship at the NPG and Tate, to the Benin Bronzes in Liverpool and now this – Hope to Nope, incidentally, is sponsored by The Guardian who reported the protest but only through PA filed copy.

At the same time museums and galleries are embracing protest as cultural subject matter. So we had Disobedient Objects (sponsored unobjectionably by a donor-advised fund of The London Community Foundation) about how domestic objects can be subversive at the V&Ain 2014, a whole season at the Barbican called Art of Change(supported by the City of London) about how artists have responded to political and social change, Ian Hislop’s I Object opening at the British Museum next month (supported by the finance group Citi)in which the Private Eye editor will use objects like the Donald Trump Baby balloon to examine dissent, and even the Museums Association’s theme for its annual conference in November (sponsored by a range of trusts and authorities) will be dissent, about museums “having the courage to challenge traditional thinking to transform museums and society”.

They are being the museum as informer and communicator, based on their principal activity of collecting to address cultural change which they ae being more and more expected to do, and they cannot be dictated to from any source as to what they collect and they have to be trusted to be monumentally apolitical, and scrupulously curatorially independent of course. But they also have to get funding against the rapidly diminishing public grants to do it, and have to be more careful than ever to ensure they accept cash from no source that could be construed as political.

Impasse, but another example of the growing opportunities for usually amiable and amicable people to shout at eachother, and this shouting match doesn’t look like being over soon.