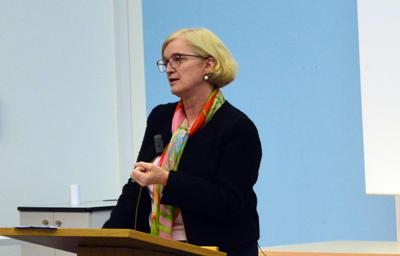 TAITMAIL Keeping the arts ahead of Ofsted’s robots

Amanda Spielman, the head of Ofsted, has been one of the quieter incumbents of that office, a post which has attracted its fair share of controversialists. Some of her predecessors considered they weren’t doing a proper job unless they were making headlines with their latest musings.

So what prompted her to single out creative arts courses in further education colleges for a fusillade of condemnation is anybody’s guess. To recap, she told the Association of Colleges annual conference recently that too many performing arts colleges were giving “false hope” to students, listing the jobs that might be open to them had they not pursued the skills they had.

“Arts and media does stand out as the area where there is the greatest mismatch between the numbers of students taking the courses and the employment prospects at the end” she said. “There is a point up to which courses that engage learners have value, but ultimately there have to be viable prospects at the end”. She added: “There are far more students taking these subjects than there are career opportunities”, and accused some colleges of putting money before the interests of young people.

It seems odd to single out arts and media courses in this way, when there are concerns about the value of many FE courses in all subjects, which have ballooned as successive governments pursue their goal of getting 50% of young people into higher education.

But it fits in with a general denigration of the arts as an area of educational inquiry. Hard on the heels of the Spielman speech comes the coverage of some comparative statistics from the Department for Education. These show that men studying creative arts, English or philosophy earn less on average at the age of 29 than people with similar background characteristics who did not go to higher education at all, while studying medicine or economics appears to increase earnings by more than 20%.

Unsurprisingly the likes of the Mail and Telegraph gleefully report this “news” along with the comments of universities minister Sam Gyimah that courses failing to provide “value for money” will have to “improve or delist” as it will become clear to students whether or not they are “worthwhile”. Gyimah quickly added that “society needs creative arts and individuals will always want to study them, even though the financial rewards are less”. But the point was made –in the new world order where everything is valued in monetary terms, students who study the arts are effectively wasting their time and money.

Of course, condemning the arts as a “soft” subject lacking academic rigour is nothing new and only to be expected from a government which has already established a “hierarchy” of value earlier in the educational system, with the Ebacc. This effectively encourages schools to shepherd their charges into the high worth subjects of history and geography, as these are the subjects which are judged in school performance tables, rather than music and drama which are condemned to second rate status.

Ofsted displayed its blind spot on this disparity a few months ago, when the organisation’s newly appointed national lead for visual and performing arts, Susan Aykin, managed to claim that she had seen no evidence that arts subjects were suffering as a result of the government’s determination to prioritise Ebacc (English Baccalaureate) subjects. Despite all the evidence which shows shrinking numbers of entries to music, art and drama at GCSE and A level, fewer teachers employed in those subjects and less time devoted to them in the classroom, Aykin chose to parrot the government’s claim that there is no evidence, saying only that Ofsted inspectors had not yet uncovered any signs of a decline in arts subjects in schools.

But you cannot continue to maintain this “two tier” system, pouring resources and respect into one area of education while dismissing others, and expect no impact on people’s perspectives and their subsequent choices. You cannot continue to assess curriculum value according to earning power alone and not lose the creative and artistic skills that make our lives worthwhile. You cannot carry on suggesting that arts and music and dance can be safely left to extracurricular activities like school orchestras and school productions and not discriminate against those students who cannot afford a musical instrument or extra lesson or the bus fare to go to rehearsals.

Arts degrees give students the skills to speak and buy them time – that most precious commodity – to work out what they want to say and how to say it. Studying Freud, or reading James Joyce or Toni Morrison for the first time, introduces students to ideas that challenge their intellectual preconceptions, as well as the consensus of the society around them. Maybe that’s why those in power try to marginalise arts degrees.

Squeezing creative and artistic values out of education can have unexpected consequences, even in the places where we say we are placing our collective investment. Consider this comment from Roger Kneebone, professor of surgical education at Imperial College London, who has warned that the loss of creative skills among medical and science students had become a concern among his scientific colleagues.

He said: “We have students who have very high exam grades but lack tactile general knowledge. An example is of a surgeon needing some dexterity and skill in sewing or stitching. It can be traced back to the sweeping out of creative subjects from the curriculum. It is an important and an increasingly urgent issue”.

But perhaps the director of the V&A, Tristram Hunt, puts the argument most forcefully. The skills gained from subjects such as drama and music will “enable young people to navigate the changing workplace of the future and stay ahead of the robots”.