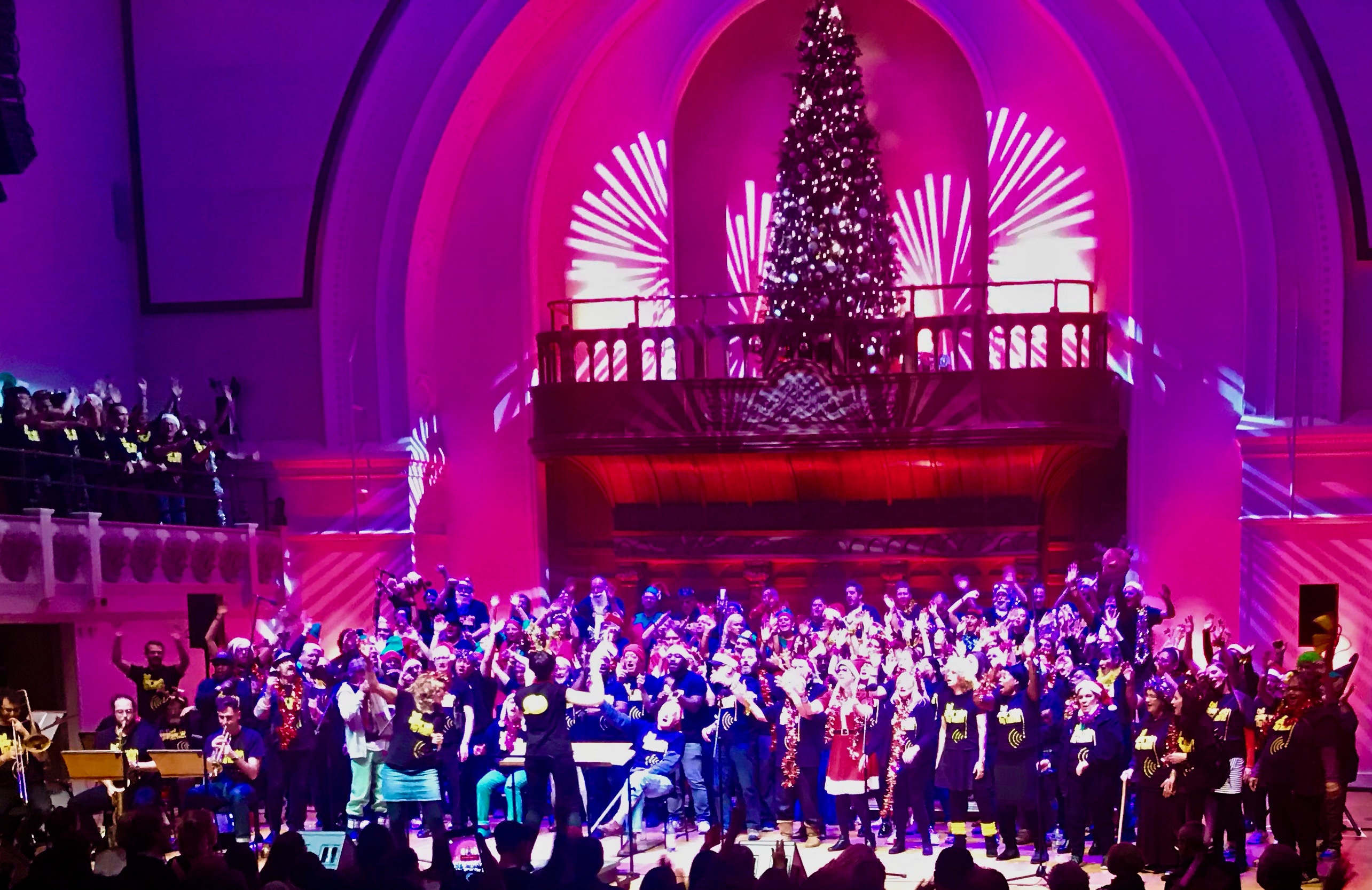 TAITMAIL Singing to the stars

It was like a Sunday afternoon at a Southern Gospel Chapel. Massed choirs on the stage jigging around and waving their arms about, the audience responding by standing and clapping their hands above their heads as they hooted their approval, impassioned young conductors urging both choir and audience on to still more frenzy.

Actually, it was taking place earlier this week in a Byzantine-style former Scientology church in Chelsea, Cadogan Hall, and despite the fact that the choir was founded by a gospel singer, Marie Benton, gospel didn’t get a look in.

And despite the 120-strong singers on stage and this being the home of the Royal Philharmonic Orchestra, none of the audience – the place was probably 80% full - had come for the music. They were the Supporters.

This was the tenth anniversary Big Christmas Singalong and the performers, members of the Choir with No Name, were all homeless.

In 2008 Marie Benton, who had been volunteering with the St Mungo’s homeless charity, realised the importance of singing in liberating people from their worst cares, and more importantly singing together. She began with four members, now there are four choirs (their numbers are variable, but 100 or so each) and since then they've sung on breakfast TV, been on tour with Coldplay and appeared at King’s Place. Each choir meets one evening a week, has a 90-minute session and then a hot meal together and the two most socially cohering things we do, singing and eating, work together as a community. The Choir with No Name's Big Christmas Singalong was supported by Civitas Social Housing, Arts Council England and the Ocorian Trustees.

Although when she won the 2017 general election Mrs May pledged to halve the number of homeless by 2022 and eliminate homelessness altogether by 2027, there’s not much sign of it happening.  There are almost four million homeless this Christmas, increasing by about 60,000 a year according to official figures. The latest Crisis annual report puts the number of rough sleepers in England every night at 4,751 and almost twice as many, 8,108, in London. Since 2010 rough sleeping in England has gone up by 169%, by 121% in London.

As Marie Benton said from the stage, her choirs – there are now Choirs with No Name in Birmingham, Brighton and Liverpool as well as London where there are two to meet demand – have found themselves at the lowest point you can imagine for a large variety of reasons, victims of the recession, of a shrinking welfare state, of private landlords turfing them out for higher rent payers, illness, and terribly bad luck. While 86% of the homeless have reported mental health issues, 44% have actually been diagnosed compared with 25% of the general public; 41% have or have had a drugs problem; 27% have or have had an alcohol problem.

With local authorities’ increasingly limited resources, they rely almost entirely on charities and volunteers – the Supporters of the audience sharing the rapture in Cadogan Hall – to help them clamber off the bottom of the dustbin by dishing out the spag bol and stewarding performances as well as contributing cash. Otherwise these performers don’t know where their next meal is coming from, where they’ll sleep tonight or even if they’ll be alive tomorrow.

And yet my picture shows a deliriously happy group of people, rejoicing in each other’s company as they belt out I Wish It Could Be Christmas Every Day. Some of them are frail and are visibly held up by their neighbours, some have mustered the self-confidence to sing solos; and the most passionate round of applause is by the choir for the audience. Music and performing together has helped these most needy of our society make the step from misery to delight, if only for a couple of crazy hours.