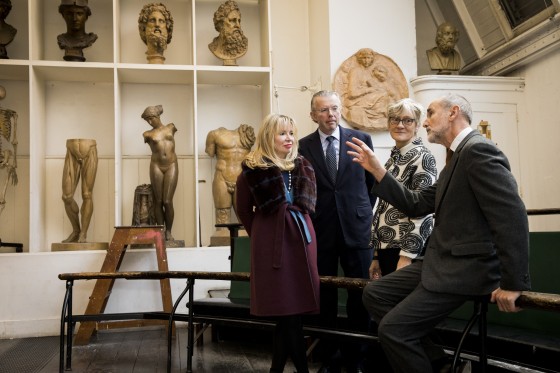 This week the Royal Academy announced its biggest ever single gift of £10m as a result of which the RA Schools will be named the Julia and Hans Rausing campus. At the announcement in the RA’s life drawing room, where we sat on the same benches that Turner and Constable once rested their young haunches, my colleague whispered, “Is that the good Rausing or the bad Rausing?”.

Good question – how safe are philanthropic gifts to the arts?

Only three weeks ago the Royal College of Art announced that it would have a Rausing Research and Innovation Building thanks to a £15m gift, but from a different Rausing. Don’t worry, they're both good, despite the lurid drugs-related stories attaching to one of them a few years ago. In fact, there are three of them all doing good, and all the children of the 95-year-old Tetra Pak heir Hans Rausing, each a billionaire in their own right. The eldest is 60-year-old Lisbet who has a history doctorate from Harvard and co-founded Arcadia, quietly devoted to conserving culture and language and, with board members such as Lord Rothschild, Neil MacGregor and the former HLF CEO Anthea Case, one of the UK’s largest philanthropic trusts.

Also one of our biggest philanthropic foundations is the Sigrid Rausing Trust created by the next of Hans’s offspring, 57-year-old Sigrid, who has an anthropology doctorate. She is a publisher (she owns Granta) and author whose philanthropy is very personal; she works hard for Amnesty and the Human Rights Watch, and on Desert Island Discs in 2016 her luxury item was the British Library. Her RCA gift moves forward the college’s research into how science and art can work together for social good.

Little brother Hans Kristian, now 55, was the problem child, the poor little rich boy who got caught up in the American drug culture, and although he founded drug rehabilitation programmes only solved his own after a family tragedy involving the death of his first wife. In 2014 with his second wife he founded their foundation which has so far given away £185m, much of it to heritage projects such as Canterbury Cathedral, the Royal Opera House and this month Tintagel Castle to rebuild its bridge. Last year the JHRT gave £2.5m to the RCA’s £108m extension, and now another £10m for the schools.

Due diligence has found a clean bill of health, but family trusts aren’t always so trustworthy. The same day as the RA announcement the head of another major cultural institute told me that he has had to back-pedal very hard from pursuing a charitable donation from the Sackler Foundation, and next month the National Portrait Gallery may have to announce returning a £1m Sackler donation in the face of a boycott threat from the photographer Nan Goldin.

The name Sackler appears on museum and gallery developments everywhere, including the Sackler Courtyard which opened at the V&A last year and educational operations that couldn’t have happened without their money. The problem is that the cash was made by the pharmaceutical Sackler brothers who created and marketed the opioid painkiller OxyContin in the mid-1990s which turns out to be highly addictive. Overdose deaths have resulted in an avalanche of law-suits.

But not all Sacklers have been given the black spot. The RA also has its Sackler Wing of Galleries, but this was funded by the Jillian and Arthur M. Sackler foundation - created by the elder brother, also a doctor, who died before OxyContin was put on the market. So that appears to be safe, but will dozens of other institutions from the British Museum to Dulwich Picture Gallery feel obliged to return gifts they can ill-afford to?

Demonstrations like Goldin’s have made the public only too aware of the potential controversy behind some benefactions, not least the widespread grants from BP which is “buying legitimacy”, activists say, by supporting institutions like the British Museum, the Royal Opera House, the RSC, and the NPG whose portrait award it has sponsored for 20 years.

And don’t scrape history away too zealously if you don’t want to reveal some uncomfortable facts. People now are more aware than ever of possibly tainted benefaction, thanks to media interest and activist demonstrations. They haven't always got it quite right, though. I was in a cheese shop recently where there was a lively discussion about whether we should be buying Colston Bassett stilton because Edward Colston was an 18thcentury slave trader. It turns out that Colston Bassett is a small village in Nottinghamshire, nothing to do with the man whose name is having to be removed from Bristol’s Colston Hall, despite his philanthropy, when it reopens after refurbishment next year.