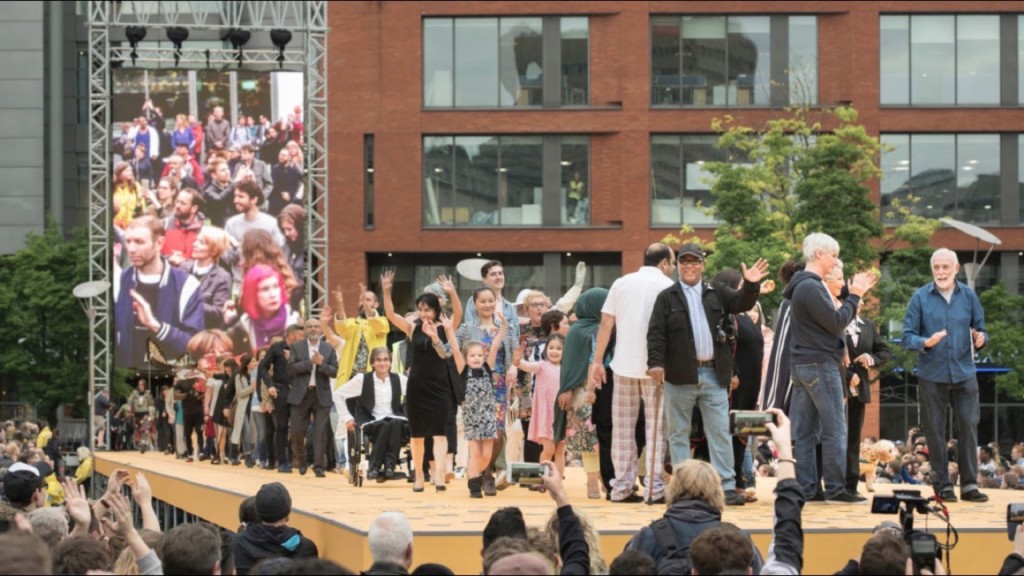 As Mrs May’s Brexit becomes more and more Mrs May Breaks It, the country is pulling itself together despite national politics, with its cities planning for their own cultural revivals. First London, now Manchester, next – where?

Mayor Burnham’s Greater Manchester Combined Authority is now much more than its name, including ten previously independent towns like Wigan, Bolton, Rochdale and Bury, which all have their own cultural highpoints. And the keys are partnerships, associations, links and, in short, a live network.

“People often see the arts as a secondary sector that when money’s tight is the first to be cut” Burnham said. “The cultural sector is incredibly valuable and not something to be underestimated. We know the economic benefit of culture, in attracting visitors and investors to our city region, but also in improving people’s health and wellbeing and sense of pride in our wonderful place”, but you can’t do it in a bubble.

“In supporting our people to fulfill their creative potential” Mayor Burnham added “we must remain outward-looking and develop mutually beneficial relationships with partner cities and towns, to maximise the impact of our work and grow Greater Manchester’s international reputation as a cultural destination.”

He’s putting £7m into 28 strategically placed organisations over the next couple of years, as well as a share of the Great Place project funded by the Arts Council and the Heritage Lottery Fund. Nurtured, Greater Manchester’s creative industries could bring an estimated 23,000 new jobs over the next decade, the strategy says.

Last year Manchester appointed a new director of culture brought directly from the creative sector, HOME’s Dave Moultrey who, whatever Brexit does, sees Manchester as a “net importer of artists”, where non-native creatives will go, prosper and remain. – “Grown in Greater Manchester. Known Around The World” goes the new slogan. Moultrey prefers “sticky city”.

But so far it's a finely detailed wish and it needs real flesh and blood development.

London’s cultural plan is already being rolled out by Burnham’s counterpart, Sadiq Khan, and it has been a major reference point for the year-long Cultural City Enquiry’s recent Compacts report, to which Manchester is a signatory as a member of Core Cities which was one of the commissioners of the year-long enquiry. In February we brought you the thoughts of one of the writers of that report, Jonathan Todd. https://www.artsindustry.co.uk/feature/1519-city-scope-putting-culture-alongside-housing

But Manchester’s plan seems principally concerned with participation and audience development (Moultrey is a one day a week part-timer and continues to run HOME the rest of the time and succeeded Maria Balshaw in the role) and the Compact idea goes much further than North-Westerners rolling up their sleeves and helping the undoubted cultural gifts of Greater Manchester to be more widely enjoyed – you can’t build an economy on volunteers.

At first look, the GMCS looks superficial: it wants culture to make the conurbation into a “place where people live healthy lives and older people are valued”, where “all voices are heard and where, working together, we can shape our future”, a place where “people are proud to live with a decent home, fulfilling job, and stress-free journeys”. It wants to “advocate”, “promote”, “ensure” and “champion”. Is that a strategy?

The Compacts will draw in culture, business, education with some central government support. It envisages the creation of artists’ workshops and studios, the placement of cultural enterprises in disused buildings, the investment of local businesses and local authority planning strategies to match.

Manchester and London both have world class galleries, concert halls theatres and venues, and the £110m Factory opening where the old Granada studios used to be, but the priority must be to encourage the creatives in all quarters of the cultural sector with studio space, venues – and some will have to have free admission - and characterized retail outlets. At the end of 2019 when Mayor Burnham assesses the GMCS perhaps they will all be there, and it will be truly sticky. Then London, Manchester and the cities that should quickly follow suit can start building our national future together.